Phoolan Devi – Rebellion of a Bandita 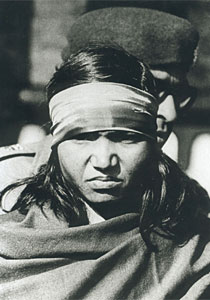 This film seeks out the woman behind the legend; a woman who rebelled against her predetermined roll and who avenged the many injustices she was subjected to including rape. It is not a fact-finding mission, but rather a platform for images, landscapes and personal accounts – und who could tell the story more convincingly than Phoolan herself.

“At the beginning of the 80s an Indian bandit made headlines terrorising entire communities in Mayda Pradesh, one of India’s poorest regions. She and her gang were held accountable for over 40 murders, a whole host of kidnappings and blackmail. In 1983 Phoolan Devis turned herself in, in February 1994 she was released - without her case(s) ever going to trial. In 1993 filmmakers Mirjam Quinte and Pepe Danquart travelled to India in search of the legendary Bandit Queen. They spoke to her relatives, ex-members of the Phoolan Devis gang and with Phoolan Devis herself. The film sheds some light on a society that is still largely archaic, where men are all important and women are of no account. Such was the Bandit Queens background, and it was only after she’d been raped repeatedly that she turned to murder. In an area where violence prevails, bandits are honoured by the poor as Robin Hood characters.” (STERN)